7 Reasons Why Dogs Lick Ears (OF OTHER DOGS & HUMANS) For many years, I wondered the same question myself.

Here is what I found:

Watch the Video (or Continue Reading):

I’ve had many dogs, some that lick more than others, but never have I had a dog that likes to lick ears more than my little French Bulldog – Stella.

In fact, Stella doesn’t just lick my ears; she downright nibbles on them. I find it absolutely adorable, while some others find it intolerable.

But truth be told, she doesn’t care – she licks their ears anyway.

But why do my Frenchie and so many other dogs engage in this behavior?

The answer to this question is that there are many reasons that dogs engage in licking behaviors.

For the most part, however, it’s a form of communication.

Dogs are constant beacons of communication, both to humans and to other dogs.

Unlike humans, they don’t have vocal cords to be able to speak and get their message across, so they do so by using other means of communication like barking, body language, and yes, ear licking.

But what exactly is it that dogs are trying to communicate when they lick each other’s ears?

And what are they trying to communicate when they lick our ears?

Today we will break down this odd dog behavior to determine what exactly is going through your dog’s mind when they start licking.

To make it simple, let’s break it down into categories by talking about:

Why Do Dogs Lick Other Dog’s Ears? 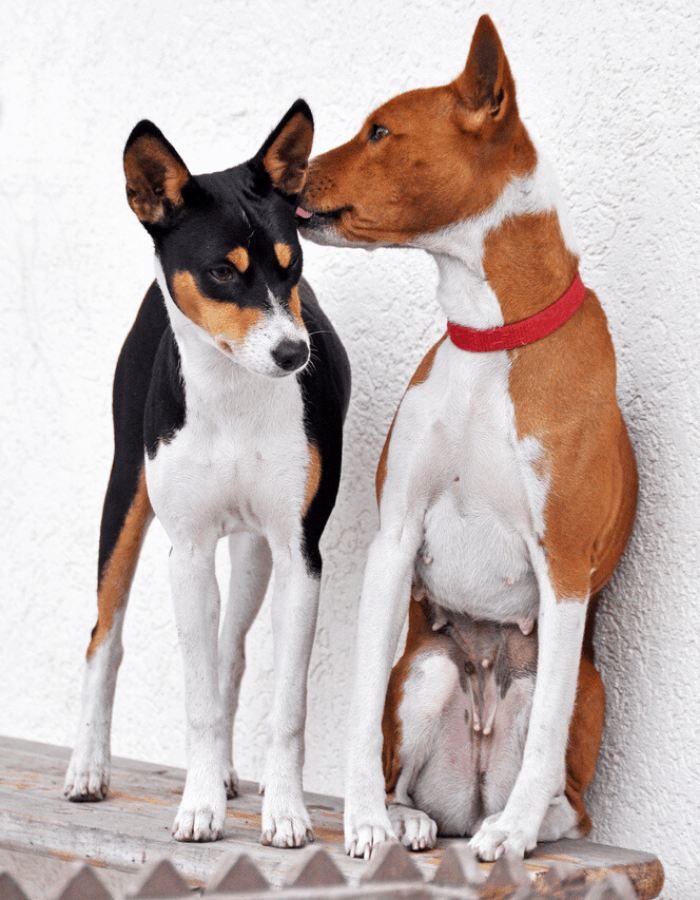 When dogs are puppies, face licking and ear licking are completely natural. In fact, licking is something that a puppy will often do to signal to its mother that it is feeding time. As the puppy grows up, they simply carry this behavior along with them.

In the canine world, it’s not unnatural to greet another dog[2] by licking them. It’s kind of like a dog’s way of high fiving another dog.

Back when dogs were pack animals in the wild, dogs often licked each other to establish their presence among others.

And though dogs no longer live in the wild, they are still genetically considered pack animals, and this behavior has simply been wired into their genetics as a way of saying hello.

Not all licking is a form of communication. Sometimes when a dog licks another dog’s ear, it’s simply a form of grooming.

This is common among two dogs that have a close relationship with one another. Just as monkeys often groom one another, so do dogs.

Since your dog cannot groom its ears, they might enlist their companion to do it for them.

Sometimes dogs will lick other dogs’ ears as a form of submission. In most cases, you will notice that it is the more submissive dog licking the ears of the more dominant dog. This is their way of showing respect.

While most cases of ear licking are completely natural and normal, it can also be a sign of infection.

If one dog suspects an infection in another dog’s ear, they may offer assistance by trying to clean it out.

Important: Beware of dogs licking ears If you have an ear infection[1]

If you find that licking is excessive, you may want to take your dog to the vet to rule out any chance of infection.

Why Does My Dog Lick My Ears? Okay, so we’ve talked about why dogs lick one another’s ears, but why do they lick our ears?

As mentioned above, when two dogs are close to one another, they may engage in mutual grooming.

But not only is licking a way to groom their friend, but it’s also a way to show their acceptance to one another.

When one dog licks another dog’s ears, it’s their way of saying:

The same is true for their humans.

When a dog licks your ears, it’s their way of saying they respect and love you, and accept you as part of their pack.

7. Because they love ear wax

Okay, so this may not be the most desirable answer ever, but sometimes man’s best friend can be gross.

Though we are not able to smell ear wax, our furry friends have a much better sense of smell than we do, and the scent of earwax is very prominent to them.

And while the thought of earwax makes us want to be ill, some dogs love it – enough to lick it.

For dogs with a sophisticated palate, ear wax is slightly salty and, for a dog, that is very desirable. Mmm – ear wax!

Should I Be Concerned About My Dogs Licking Behaviors? In most cases, no. As seen from all of the reasons above, dogs are usually just using licking as a form of communication.

With that being said, if you carefully observe your dog’s interactions and notice that their licking has become obsessive, it may be time to intervene.

While obsessive licking behavior doesn’t necessarily cause harm to the dog doing the licking, it can cause damage to the dog being licked.

Remember, saliva is wet. And when a dog licks another dog’s ears, it creates moisture within it.

This moisture creates the perfect environment for bacteria and yeast to flourish and could set the “victim” dog up for infection.

On the opposite end of the spectrum, obsessive licking could also be a sign of infection.

If you notice that your dog is licking another dog’s ear obsessively, and this is out of the norm for their normal behavior, it could be a sign that the other dog has some type of medical issue.

At this point, it’s best to get the perspective of a veterinarian. So why do dogs lick others’ ears?

Many people often question why dog owners let their dogs lick them so much. Other people think it’s downright gross.

And are they really so crazy for thinking so? I mean, look at everything that your dog licks or puts in its mouth (including ear wax).

When you look at things that way, you might understand why so many people are against letting their dogs lick their faces.

But are dog’s mouths really that harmful to us? According to infectious disease specialist, Pritish Tosh, no, they are not that harmful.

While you should try to keep your dog away from licking open wounds, letting them lick your face or ears is unlikely to cause any harm.

While dogs mouths are full of bacteria, it’s highly unlikely that this bacteria will cause any harm to a human.

In the odd case that it does, it’s usually because someone already has a very weakened immune system.

Precaution should be used then when dogs are licking the elderly, cancer patients, pregnant women, or others with diminished immune functioning, but even then, illness is unlikely.

2. Why does my dog lick me in the mornings?

Again, there are several different reasons that your dog may lick you first thing in the morning.

Like we mentioned before, licking is often used as a greeting or display of affection.

Sometimes this is just your dog’s way of saying “good morning”, “hello”, and “I love you”. Other times, it could be because your dog likes the way you taste.

While you sleep, your skin secretes sweat and oil, which gives off a salty flavor. In such a case, your dog might just be looking to please their taste buds.