HOME → QUESTIONS → Health and Grooming → Why Do Dogs Sleep with Their Tongues Out?

Why Do Dogs Sleep with Their Tongues Out? It is not uncommon to catch your dog’s tongue hanging out during different times of the day, particularly during and after playtime. But what would cause dogs to sleep with their tongues hanging out?

Dogs sleep with their tongue hanging out due to being completely relaxed- a comfortable deep sleep. However, a few health concerns might cause this behavior in certain dogs, like dental issues or Hanging Tongue Syndrome.

Sometimes when you see a dog sound asleep, you know it’s completely out cold because its mouth is open and its tongue has spilled out. A little sound or a slight nudge can stir the dog, and most of the time, the first thing it does is recompose its face. 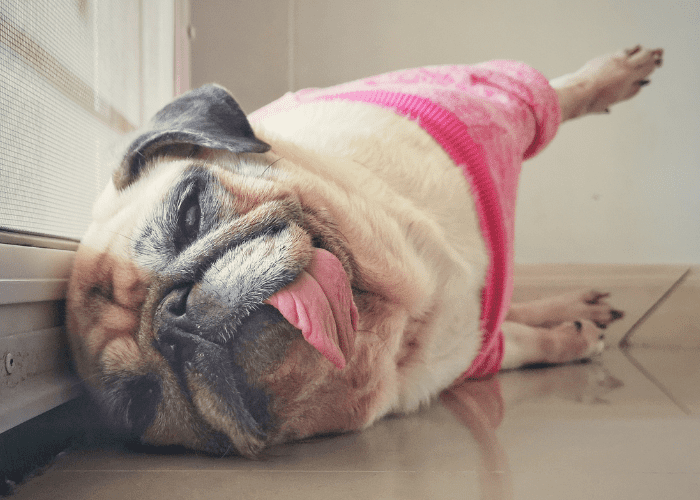 Some dogs, like the pugs, might have their tongue slip out due to the muscles being too relaxed to keep the tongue where it normally is. There are more tongues than their pushed-in skeletal structure can handle when unconscious.

Other dogs live out most of their lives without having this occur due to the overall shape of their skull. The more room within the jaws and the less pushed in the skeletal structure is, the less likely (or less frequently) it will sleep with it all hanging out.

These kinds of sleeping habits are common with many breeds and are a trait that will stick around for the dog’s life.

What is The Flehmen Response? 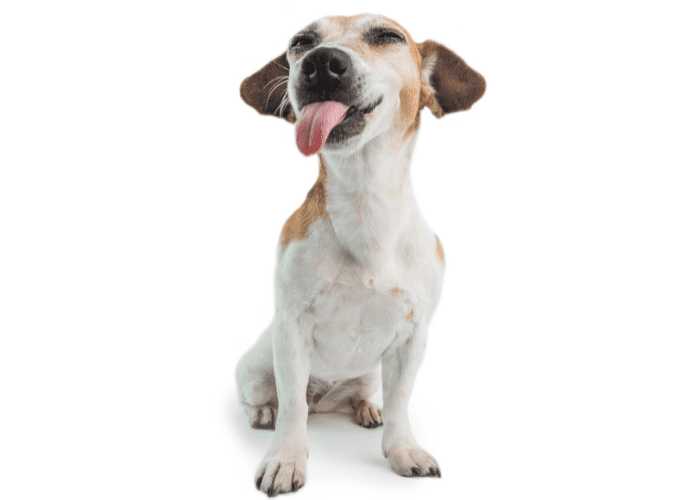 Blepping is when a cat or dog’s tongue sticks out just a little past its face. More often than not, this happens if there is another animal around (or the presence of animal urine) or if the owner has the scent of another animal on their skin or clothing.

Owners typically find it cute, as it appears that the animal is giving them raspberries and gives the cat or dog an overall silly look. However, they haven’t forgotten where their tongue is, and it’s a deliberate action.

Cats and dogs do this as an investigatory measure to use a sense of taste to detect pheromones. Dogs take it further than sticking their tongue out, often raising or curling their upper lip.

Once in a while, you can catch your dog doing this less common than the normal snoozing oddities.

When are Dogs Most Likely to Sleep with Their Tongues Out? Some breeds don’t sleep with their tongue out all the time. Some things can influence whether or not this happens, the chief of which is warm or hot weather.

Some dogs take the heat like a champ, but most breeds don’t do so well when hot and humid. Even the shorter-haired dogs wear fur coats, while humans can barely stand wearing pants or keeping their shirts on.

Cooling Down the System 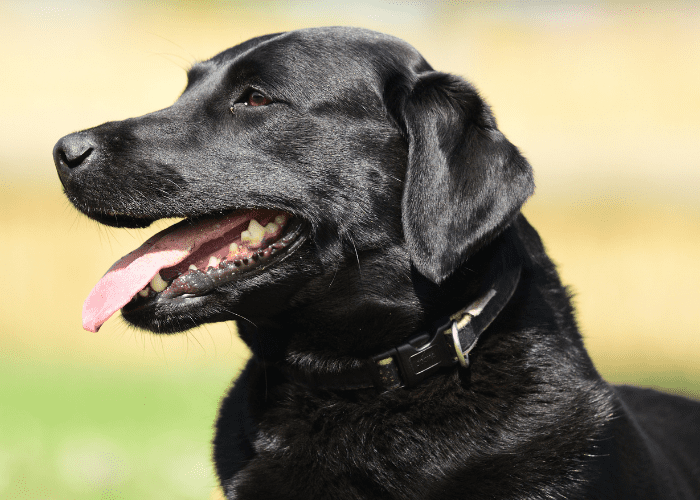 Dogs cannot sweat out heat from their systems as we can, and they have no sweat glands outside of those found on their paw pads. The only natural way dogs can expel heat is by panting.

So, dogs are more likely to pant in their sleep when the weather gets warmer, leaving their mouth open and tongue hanging out as it slips back and forth into consciousness. Dehydration might also be a factor supporting this action, so it’s essential to ensure there’s always plenty of water when it gets warm out.

Should I be Worried About My Dog’s Tongue Hanging Out? Suppose your dog has traditionally slept with its tongue, eventually hanging out during a good sleep. In that case, there’s probably no problem, and it is only doing something that comes naturally.

However, if your dog is a few years old and has never done this before while sleeping, it is worthwhile to investigate a little. If the inside temp is the same as it has always been and the dog shows no obvious signs of being sick, a closer examination by a vet should follow.

Outside of a temporary illness or a change (elevation) in room temperature, there are a couple of reasons why the dog could be sleeping with its tongue out. Hanging Tongue Syndrome is when a dog can no longer control its tongue properly, unable to keep it in its normal position inside the jaws.

Some breeds are more prone to have this condition develop genetically. But it can also result from severe injury to the jaw, teeth, or other forms of deformities to the facial area. One of the jobs assigned to teeth is to be a barrier to the tongue. Take away that barrier, and a dog who traditionally slept with its tongue in will sleep with its tongue out from that point forward.

Dental pain can also cause this to happen. With their mouth open, their tongue is often slid out of the painful area, if for no other reason, than to get it out of the way as an attempt to deal with the pain. If a dog who normally sleeps with its mouth closed and tongue in gets stressed to an extreme, it will work itself up to a pant. If the anxiety or stress is bad enough, the dog can get tired and fall asleep but will have its tongue out to cool down the body after having worked itself up.

Some medications can cause your dog to suffer side effects that vary. Among them would be the dog sleeping more soundly than it may have in the past, causing it to sleep sluggishly with its tongue hanging out—kind of a medication-induced stupor. 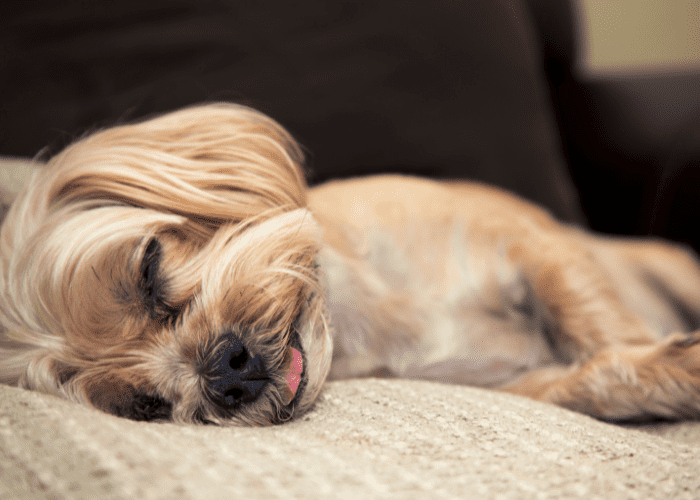 Dogs can do some strange things. Sometimes it’s harmless or even normal; other times, it can signify a problem that should be looked after.

Either way, it is never a bad idea to bring it up to the vet on their next visit or even make an appointment specifically for this issue if this is something that you’re concerned about.

For the most part, it’s just something that dogs do that looks silly when we catch a glimpse of it happening, but it takes place for a variety of good reasons in the world of canines.