Pugs have always been bred as companion pets.

They were kept by Chinese royalty and nobility, and there is evidence of pugs from the 1st century BC onwards.

They are a highly recognizable breed, characterized by their “squished” faces and coat color.

Can Live In Cold Weather:  Yes A pug a.k.a. Dutch Mastiff is an ideal family pet because they’re friendly, affectionate, and very easy to care for.

However, owners should be aware that pugs are prone to many health conditions, many related to their short noses and breathing problems.

Color: Fawn, black or brindle which is rare The history of pugs can be traced back to the first century BC.

While the breed as we know it didn’t exist back then, similar dogs were owned by members of the Song dynasty, China’s ruling family.

Similarly, pugs were kept by Buddhist monks and Chinese nobility.

They were sometimes given as gifts to foreign royalty or diplomats, but they were never sold because they were considered too valuable. They then became popular in Europe during the 16th and 17th centuries, again with nobility and royalty.

They can be seen in plenty of Renaissance paintings, and also feature heavily in the work of William Hogarth, a famous 18th-century painter.

These dogs continued to soar in popularity throughout the 18th century and made it to the USA in the 19th century.

They were recognized by the American Kennel Club in 1885 and have been a common sight at dog shows since.

Similarly, pugs have remained a popular companion and family pet across the world. Pugs are very affectionate dogs and love to be around humans. Their sole purpose is to be a companion pet, meaning their main goal is to please their owners.

They love to cuddle and form very strong emotional bonds with their owners.

Similarly, they are hilarious dogs that love to play. This makes pugs ideal family dogs because they’re particularly good around children.

Their temperament is sociable and outgoing, and they’ll easily get on with every member of the family.

They are generally easy to train, but their playful nature sometimes makes it hard for owners to be in control.

An untrained pug can be very rebellious, so obedience training should be started at a young age and continued throughout the dog’s life.

They are also very good with other animals and are suitable to be kept with almost any other dog.

Some Dutch Mastiff might develop a tendency to chase birds or cats, but the breed’s size means it’s unlikely they’ll ever do any harm.

People looking for an easygoing dog that’ll get on well with other animals could do a lot worse than a Dutch Mastiff.

One of the main benefits of having this dog is that they don’t need too much exercise.

Daily walking is still necessary because they’re particularly prone to obesity, but these only need to be about 30 minutes long, maybe with the occasional longer walk thrown in.

They can spend up to 18 hours a day sleeping, meaning they’d much rather lie about the house all day. These reasons also mean that these dogs are good for keeping in apartments. However, one thing owners should be aware of is that this dog loves to bark.

Some owners might tell you otherwise, but many of them enjoy barking at strangers or sudden noises. While this isn’t the end of the world, it can be difficult to manage if you live in an apartment.

One thing that all potential pug owners need to know is that they can have difficulty in hot weather.

Not only do they have a quite thick fur, but their flat noses mean they have difficulty breathing, and so have a harder time regulating their temperature.

They will start having difficulty when temperatures reach 75 degrees and should be kept somewhere cool and not exercised.

Generally, it’s best to avoid keeping them in places that are too hot. It can be helpful to check with a local vet to see what they think about the idea. 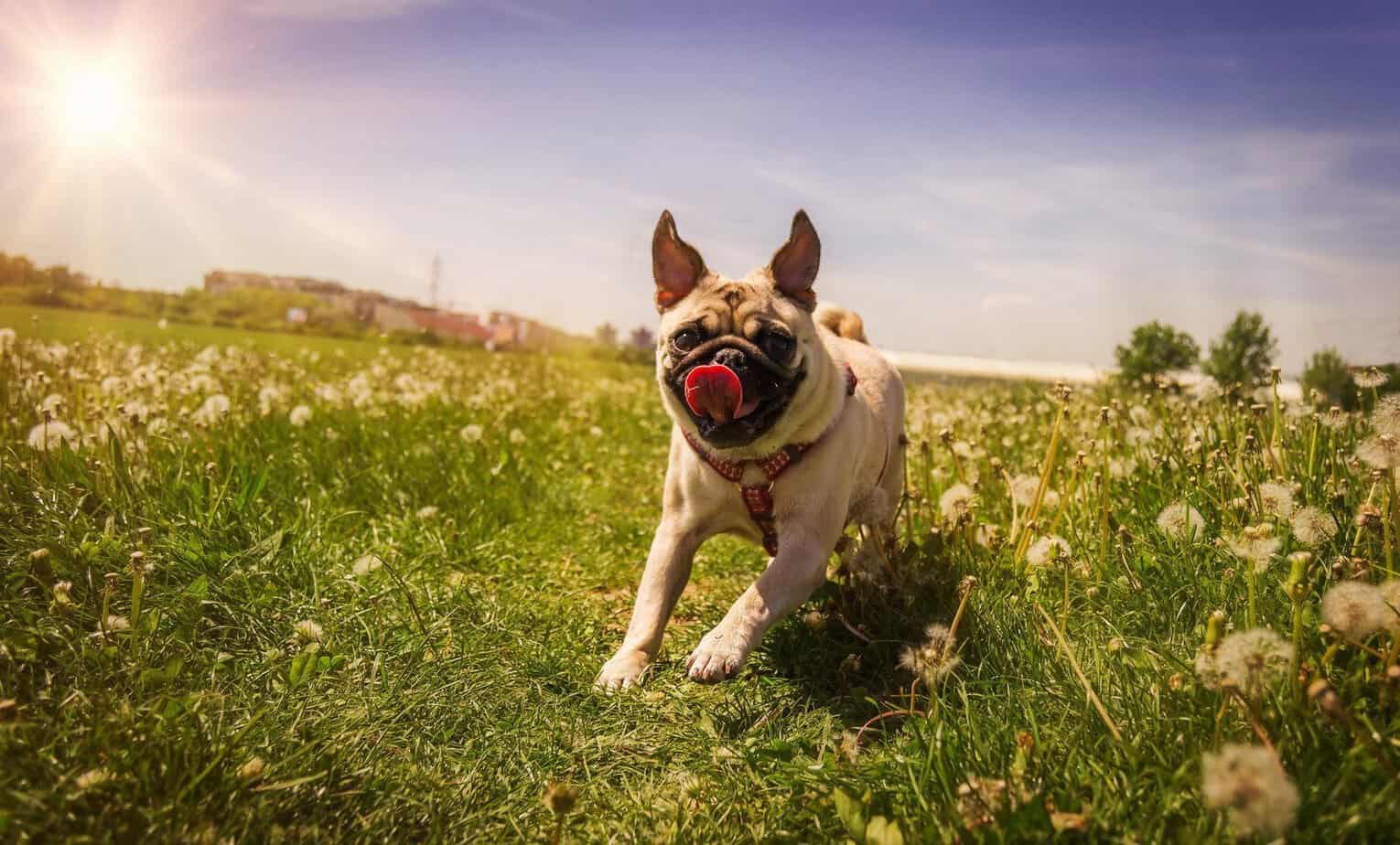 On the other hand, they get on quite well in colder areas. Pugs in cooler climates will be much happier to play and exercise as much as you want.

Their thick fur means they find it easy to stay warm, and usually won’t even need an extra coat in the winter.

As mentioned, these dogs love to bark, and one of the things they most enjoy barking at are strangers. They aren’t necessarily wary of strangers, although they can be if they feel threatened. Although pugs are very sociable dogs, they can be left alone for long periods.

This makes them suitable for working owners, but pugs will be much happier if left with other dogs.

Also, they appreciate some mental stimulation to keep them occupied during the day.

Overall, pugs make a good choice for first-time owners because:

However, first-time owners should be aware of the breed’s common health complications, as these can become expensive to manage. Pugs have a short, double-layered coat that’s quite smooth and glossy.

They generally need little maintenance, but their coat sheds all year round.

This is best brushed out weekly using a rubber grooming glove or razor comb, and should ideally be done outside.

One thing owners need to pay attention to is their eyes. A pug’s bulbous eyes are very prone to problems because they catch debris very easily.

Even a small piece of grass can scratch their eye, which can lead to ulcers and other health problems.

Owners should pay attention to their eyes, checking them at least daily for signs of debris or damage. If caught early enough, any problems can be easily managed by a vet.

As with all breeds, owners should trim their nails regularly, and brush their teeth several times a week.

Also, their jaw shape means they have some dental problems, but these can be avoided with regular brushing.

This means their skull is short and wide, which results in a lack of proper snout like other breeds.

They have shortened airways, and their soft palate, which is found in their mouth, can sometimes be too long and overlaps their airways.

This is what usually causes breathing problems, and leads to difficulty regulating temperature and issues when exercising too hard.

You might ask yourself:  Can I take my Pug Swimming? Some vets have started offering surgery to reduce a pug’s soft palate and open their nostrils, which can help but is also very expensive.

The biggest thing with this issue is that it’s present from birth, and is a part of the breed.

For this reason, owners should consider whether they will be happy to deal with any breathing problems when they arise, and the chances of them doing so are quite high.

Pugs are a bigger responsibility than people think and can become very expensive if not cared for properly.

Another common problem with pugs is obesity.

It can be very difficult to keep their weight down, and owners should do this with a strict diet and plenty of exercise. Obesity in dogs is just the same as obesity in humans and can lead to all the same health complications.

The final big problem with pugs is their eyes. Corneal ulcers are the biggest threat and can be caused by the most seemingly minor issue.

If left untreated, they can lead to blindness and surgery to remove the dog’s eye. It’s essential that owners always check their eyes, and get them to a vet as soon as possible.

So, if you’re thinking of getting this dog, as you have read, there are pros and cons of owning a pug.