Why Do Huskies Talk? Chances are, you’ve seen the YouTube videos of Huskies yapping and howling- even sounding like they’re speaking words once in a while.

Why do Huskies talk so much? Not only that, but why does it seem that they talk more than other breeds of dog?

They are highly vocal due to how closely related they are to their wolf ancestors. Wolves are very vocal to those within the pack, as that is how they communicate with one another. If your Husky is vocal with you, it’s because it sees you as a part of its pack, if not the leader.

Huskies make all kinds of different noises, but full-on barking is not among them strangely enough. That’s not to say that they don’t or can’t bark. But typically, they either howl, whine, yip, or try to talk.

When it comes to talking, some get closer to the mark than others, but their attempts are cherished and unique nonetheless.

Why Do Huskies Talk More Than Other Dogs? 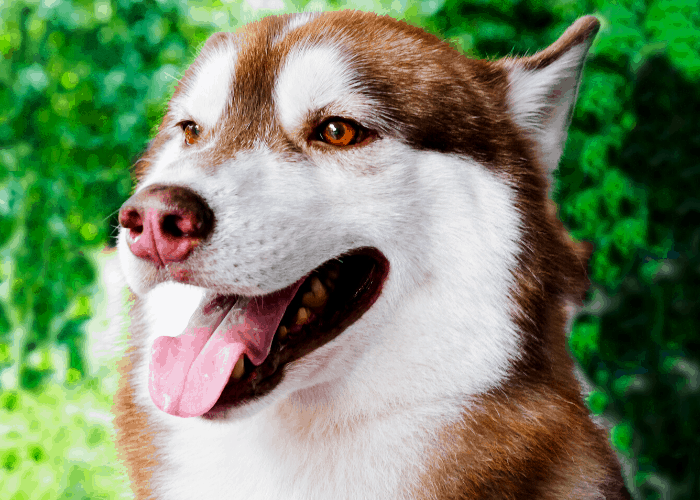 Huskies are derived from packing dogs. Dogs that work together and rely on one another, with an intuitive pecking order.

In today’s world of dog breeds, we’ve got dogs of all shapes and sizes. The majority of these breeds are not derived from pack dogs but share ancestry that comes from elsewhere.  Some can date back thousands of years.

Some other dog breeds that could have once been directly related to pack-type dogs have long since had those instincts and tendencies bred out of them.

These are the types of breeds that might bark, but don’t tend to make the howls or any of the other noises that you’d find your Husky making.

Pack dogs rely on several different means of communicating with their pack. The most universal means would be through the vocal cords (this is something that I think all of us can understand). Stunningly, yes, they can! However, the word imitate is important to emphasize. You’re not about to sit down and have a back and forth conversation with your Husky or any other dog for that matter.

MUST READ: Siberian Husky tells his owner ‘I love you’ will completely melt your heart.

We typically associate this behavior with a variety of birds. Mimicking different words that they hear often, but not necessarily knowing anything they’re saying.

Some Huskies try to imitate their owners, choosing words that fall within their vocal range to attempt. Typically, short, one-syllable words that come easily with a wine or a moan.

There are two camps of people when it comes to hearing a dog speak a human word. One camp thinks it’s incredibly cute and special. The other camp finds it creepy, as the dog’s voice saying a human word can be downright disturbing sounding. As we’ve touched upon, These Russian dog breeds use vocalizations to communicate with their pack, or in the home, their humans. Sometimes, those messages aren’t playful, mimicking, or anything lighthearted.

Being bored, frustrated, or feeling that they haven’t received enough attention could all be reasons why they would wind up throwing a vocal tantrum.

Other emotions, such as being scared, frightful, or nervous, can also be reasons. Fortunately, these reasons are typically easily discerned and remedied.

Other bouts of temper tantrums may come by way of other types of needs, such as being hungry, thirsty, or needing to get out the door to relieve itself. With simple examination, you should be able to deduce the dog’s reasoning as it relates to these kinds of issues. In most circumstances, the vocalization isn’t the dog misbehaving. However, vocalization often accompanies bad behavior with Huskies.

For example, if a husky is whining and throwing a vocal tantrum, that’s one thing. But a husky making the same noises while showing attempts of dominant behavior, or aggression, is a whole different issue.

Reasons for the former could be something as simple as having to go potty. At the same time, the ladder is clearly bad behavior.

Though the vocalizations aren’t necessarily bad, this behavior can be minimized through regular training. Concerning the bad behavior, that will have to be trained out of any Husky- just some more than others.

Does Your Husky Talk a Lot? Worried? It isn’t unusual to have a chatty catty for a Husky. However, if your dog is talking or howling to excess, there are certain things that you might want to pay attention to.

The first would be to look the dog over and see whether it’s been injured. If there’s nothing you can tell physically, keep your eye on its eating, and whether or not it’s showing signs of being ill.

This should be your only true worry about the noise- whether or not it’s telling you it’s not feeling well.

But, if you don’t see anything visible, and it’s eating and drinking without any hesitation, it could be under-stimulated. Huskies need exercise and playtime. Perhaps it’s trying to tell you how board it is?

These are vocal dogs that don’t require a cause to worry to feel like complaining. Just like a child that can’t talk yet, Huskies make do with what they’ve got to try and indicate what it wants or needs.

Why Does My Husky Bark at Me? Huskies often bark at their owners when they feel as if they’re not getting the attention they require.

The excitement knowing that you’re about to walk through the door and the promise of some long-awaited company, could be the reason it’s so vocal toward you when you come home from work, for example.

Huskies are social dogs that depend on companionship to be happy and comfortable. Suppose you’re leaving your dog alone for extended periods.

In that case, it could make it anxious enough to bark excessively at you upon your arrival. Anxiety quickly translates into excitement in this scenario, and both of which cause barking, howling, or an otherwise noisy greeting.

Some dogs don’t suffer separation anxiety as severe as others, so they might be comfortable being alone. But Huskies are a social breed, and with this understanding, you could do different things to help it out while you’re away.

Things such as establishing someone who the dog is friendly with to stop by from time to time while you’re away could help.

In some circumstances, it might be worthwhile to hire a dog sitter to help keep the dog from getting as anxious as it does when it’s alone.

Why Do Huskies Whine? In short, a Husky could whine for all of the same reasons given above about why they talk. Whining is a form of communication that we’re familiar with when it comes to dogs being hurt somehow.

Though they can and do use whining to express pain, duress, or other reasons common to dogs, Huskies aren’t bound to only using whining for those reasons.

Huskies, at times, incorporate whining in their vocabulary similarly to howling. You might even hear a Husky start with a whine and end with a howl, and vice versa.

Long-time Husky owners tend to develop a sense of what different pitch whines mean. Some types of whining means it wants to play, others mean it’s hungry, etc.

Suppose for some reason, you can’t determine what your dog is whining about. In that case, it’s better to err on the side of caution, talk to your vet, and rule out any health-related issues.

Why Doesn’t My Husky Talk? Despite the generally chatty nature of the Husky breed, there are exceptions to the rule- every dog is different. Some individuals might not be as vocal as others. The reason why it doesn’t say much could be that simple.

But, sometimes being uncomfortable with their environment or even dog-depression can keep an otherwise talkative dog to remain silent.

Think about your dog and the environment it’s in. If your dog is quiet and shows signs of being happy, it’s likely just not got a lot to complain about. Huskies are beautiful dogs that have caught the hearts of people the world over. Their talkative nature is something that is equally revered as it is often misunderstood.

If you were thinking about picking up a Husky pup, keep this part of their nature in mind, and apply it to where you live. Do you live in a place that can get away with a chatty, possibly noisy pet? If so, it shouldn’t be an issue.

But, if you’re in an apartment building with thin walls, you might want to wait till you can enjoy your pet without angering the neighbors.

Why are Huskies so Dramatic?

Huskies tend to react dramatically to confrontation, displeasure, reprimand, or when forced to do something it clearly would rather not do.

Though on the one hand, it can be a dramatic scene. On the other hand, they leave no room for us to guess about how they’re feeling.

Do Huskies Talk to Each Other?

Yes, they certainly do. Like the wolf, Huskies are extremely vocal when interacting with those they see as members of their pack.

This is how they behave with each other, and they’ll carry that behavior to owners and the owner’s family as well.